And the Winner of the IFTNEXT Food Disruption Challenge Is... 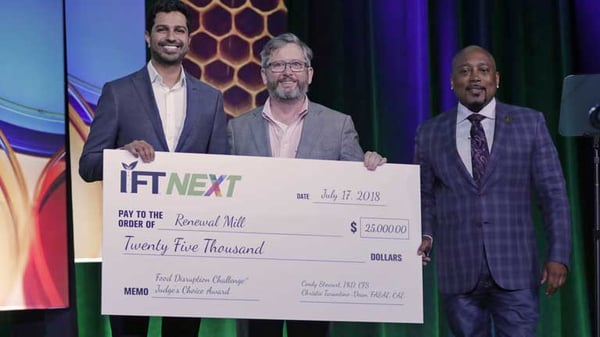 Six forward-thinking entrepreneurs pitched their companies in the inaugural Food Disruption Challenge competition at IFT18, and Renewal Mill, which uses a by-product of soy milk production called okara to create a gluten-free flour ingredient, emerged as the winner of the $25,000 grand prize. C-fu FOODS, which uses a patent-pending process to develop textured insect protein suitable for a wide variety of applications, was chosen by audience vote as the winner of the $5,000 People’s Choice Award. Entrepreneur Daymond John of ABC TV's Shark Tank served as emcee of the event.

"The experience has been fantastic," said Sumit Kadakia, co-founder of Renewal Mill. "It was a wonderful mentorship process that we went through in order to prepare for this event, and having the opportunity to work with not only our own mentors, but the other mentors who were provided through the program, was really incredible, as well as the overall experience itself. I thought it was a great opportunity to tell our story here at IFT to a lot of really incredible influencers and people in the industry, so we are really, really happy to be here!"

Kadakia began his 4-minute pitch by explaining that the company is “redefining mass market nutrition,” by utilizing the nutritious by-products left over from food processing. “This wasted nutrition has both environmental and social consequences,” said Kadakia. But, with the its patent-pending technology, the company can take that food waste and produce a variety of nutritious milled products. Starting out, Renewal Mill is working with soy milk manufacturers to utilize the pulp left behind to make Pure Okara Flour, but the company hopes to work with other food waste forms to create even more nutritious ingredients. For example, Kadakia shared that the company has a partnership with Ripple Foods—makers of pea protein dairy alternative products—to capture the split pea starch.

For now, though, the company is focused on its okara flour, which offers a high-fiber alternative to refined flour and that, according to Kadakia, “doesn’t change the taste, texture, or appearance of the product it is used in.” To showcase okara as a “premium ingredient base,” Renewal Mill has created a single-serve cookie pack that is gaining traction in convenience and corporate food channels. At the end of the day, however, Renewal Mill wants to be an ingredient company. As Kadakia explained to the judges, in five years 70% of its sales will come from sales of its ingredient(s). The start-up expects to make $130,000 in revenue this year and be profitable (at about $2–$4 million in revenue) in about two years. In between now and then, “we need to create a market for these ingredients ourselves,” said Kadakia, by showcasing the technology and low price point that sets it apart from other alternative flours on the market.

So, how will Renewal Mills be spending their $25,000 grand prize? Kadakia said the funds will go toward expanding their product distribution through a new pilot program in Appalachia.

"We’re really focused on accessible and affordable nutrition, and I’m really excited about the work that we’re going to be doing in Appalachia," said Kadakia. "I actually grew up in West Virginia, so being able to bring higher fiber, no preservative, healthier products that have a really great environmental story behind them to people who haven’t typically had the opportunity to be the first recipients of products is something we’re really excited about, and this funding will help us get there even faster."

The Future Food Disruptor of the Year™ was chosen by a panel of six judges who quickly deliberated and cast their votes after the pitches concluded. While the audience waited to learn the judges’ decision, John shared some of his thoughts about successful entrepreneurship in an interview with IFTNEXT Think Tank member Peggy Smedley (editorial director of Connected World magazine and host of The Peggy Smedley Show.) Today’s entrepreneurs are focusing heavily on incorporating a social responsibility element in their business plans, he noted. “Young entrepreneurs are all trying to add social causes to what they’re doing,” said John. “Yesterday’s consumer was [about] ‘what have you done for me lately?’ Today’s consumer is [about] ‘what have you done for anybody lately?’”

Participants in the Tuesday morning pitch event were chosen in a process that spanned several months, featured two elimination rounds, and initially drew 65 applicants from around the globe. The six finalists participated in a six-week mentoring program in which each was matched with a mentor and received the benefit of insights shared by several subject matter experts on topics ranging from fund-raising to food processing.

Other companies that reached the finals of the pitch competition included:

IFTNEXT is made possible through the generous support of Ingredion, IFT’s Platinum Innovation Sponsor.