The Delicious World of Barbecue 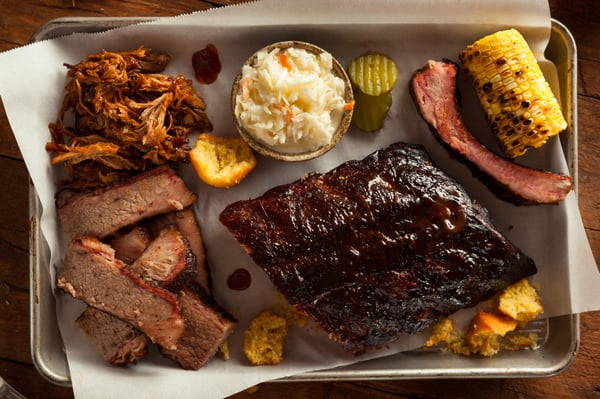 Cooking food on the grill is a favorite pastime throughout the United States. Barbecue enjoys broad popularity across the country, and yet its appeal is often tied to regional taste and flavor preferences.

Distinct regional barbecue styles exist around the U.S., each defined by specific meat, techniques, hardwood, and seasonings/sauces that give characteristic flavors, aromas, and textures. And in recent years, Asian-style barbecue has seen a noticeable spike in popularity.

Let’s take a quick look at some delicious options from across the wide world of barbecue.

In the U.S., barbecue is known for rich, flavorful sauces and, typically, large pieces of meat. Various styles of barbecue evolved throughout areas in the South and Midwest.

The tangy, peppery sauce that is typically used in North Carolina barbecue is vinegar-based and generally made from cider vinegar, sugar, and chili flakes. It has a thinner consistency than sauces used in some other barbecue regions.

Depending on where you are in South Carolina, the sauce composition differs slightly. A thinner tomato, mustard-based sauce is used in the western part of the state, a mustard-based sauce in the central region, and a sauce that is similar to that used in North Carolina in the coastal region. The sauce is typically made from yellow mustard with ingredients like brown sugar, black and cayenne peppers, and cider vinegar adding sweet and tangy flavors with some heat.

Kansas City barbecue usually includes a sauce that has a stick-to-your ribs quality. It features a thick, sweet molasses and tomato sauce on pretty much any type of meat.

The tomato-based sauce used in Memphis barbecue is on the thinner side, and can be made from ketchup or tomato paste, hot sauce, vinegar, and sugar.

In Alabama, different types of sauce are used, but the one that is unique to the state is a white sauce, which is a combination of mayonnaise, horseradish, lemon juice, cider vinegar, and cayenne pepper.

And then there is Texas, where beef brisket is typically coated with a flavorful dry rub seasoning blend rather than a sauce.

It is these regional differences in the sauces/marinades, smoke profiles, preparation methods, and types/cuts of meat that are celebrated and recognized by chefs, home cooks, and product developers.

Like American barbecue with its regional differences in sauces, meats, and prep methods, Asian barbecue is equally diverse, culinarily speaking.

Asian barbecue emphasizes flavor profiles that balance savory, sweet, and heat, and typically involves small pieces of meat that have been marinated and then grilled over high heat, according to a recent trend report produced by Asenzya. The report profiles nine varieties that span several regions of Asia and provides inspiration for culinary and product development, including the key ingredient components and flavor profiles of the barbecue styles.

Korean barbecue is getting lots of attention right now, and justifiably so. Generally speaking, it involves smaller or thinner cuts of meat marinated in a combination of aromatics like onion, garlic, and ginger and umami-packed ingredients like soy sauce. For Americans, their introduction to Korean barbecue has most likely been bulgogi, thin slices of beef (sirloin, flank, skirt, tenderloin, or top round) that are marinated in soy, ginger, sugar, onion, sesame oil, and sesame seeds and then cooked tableside or on a metal plate over a burner. The meat is often served with soybean paste and lettuce pieces to create a wrap and sides of kimchi or shredded pickled vegetables. Other varieties of Korean barbecue include jumulleok, short steak marinated in a blend of sesame oil, hot pepper, and salt that is cooked tableside, on a grill, or over a burner; and dak galbi, medium-sized portions of chicken marinated in gochujang, rice wine, chile flakes, soy sauce, and aromatics and cooked in a pot, stone bowl, or pan.

While Korean barbecue is all the rage, there are several other styles of Asian barbecue from regions beyond Korea. Char siu, for example, is a popular barbecue method in Cantonese cuisine. With char siu, cuts of pork—be they pork loin, pork belly, pork butt, or pork fat—are coated with a blend of hoisin, honey, mirin or sherry, soy sauce, and five-spice powder and slow roasted and smoked on a hook over a fire. The marinade imparts both savory and sweet tastes along with a slight fermented flavor to the pork. The cooking process for char siu is the most closely related to American barbecue of the Asian barbecue methods.

In Japan, meanwhile, yakiniku is popular and thought of as a variation of bulgogi that was modified to suit Japanese taste preferences. After beef is marinated in soy sauce, sugar, mirin, garlic, miso, chile peppers, and sake, it is cooked tableside or on a metal plate over a burner. Yakiniku-style barbecue can use other meats besides cuts of beef, including offal, pork, and chicken. Even seafood, shrimp, and squid can be marinated and prepared in the yakiniku style.

Whatever your barbecue preferences, one thing’s for sure: it’s pretty much always delicious.

A version of this post originally appeared in the Food Technology magazine article “Globe-Trotting Ingredients.” IFT members and Food Technology subscribers can read the full article for free here.