The Science Behind Your Favorite Pie 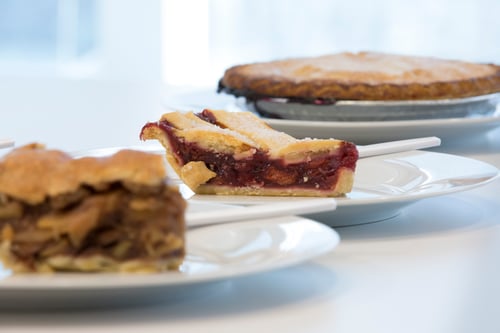 Whatever the filling, a truly great pie sits upon a great crust. Pie recipes generally call for just a few ingredients, but arguably the most crucial—and most debated—is type of fat that will go into the crust. Pie crusts are typically made with either butter, shortening, or lard, or some combination thereof. Pie makers will often swear by their fat of choice, so we wanted to find out a bit more about why a butter-based crust tastes different from a shortening-or lard-based crust.

Prof. Eric Decker, IFT member and Head of the Department of Food Science at University of Massachusetts, Amherst, helped shed some light on the scientific reasons behind why different fats lead to different tastes and textures in pie crusts:

IFT: Why do pie crusts come out differently depending on what fat you use while making it?

Decker: The easiest way to think about this is comparing it to bread. If you make bread, its typically very elastic. That’s because the proteins crosslink with each other, which makes a very strong protein network. But in a pastry, you don’t want that tough of a dough. You want it really flaky, and that’s why you put in a solid fat, because the fat basically coats the protein and prevents them from cross-linking together. So the solid fat helps decrease the protein network when you make the pastry dough, but it also helps because while it melts during the cooking process it re-solidifies after cooking. This prevents the fat from migrating out of the dough during storage.

IFT: Flavor-wise, what is the different between butter/shortening/lard?

IFT: So what would you say is the most effective fat to use in pie crusts?

Decker: Pie is probably my favorite dessert, I’m just not so focused on the crust. To me, I like a pie that’s got a really thick filling that doesn’t spill out when you cut it. Obviously, I’ve had pie crusts from all three categories, and I really don’t like butter all that much, because I think it adds way too much flavor. But for croissants, I think butter is obviously way better.

So there you have it—expert insight into the science of pie crusts.

Looking for a decidedly non-expert, subjective opinion? Why, we’re happy to help! Some IFT staffers participated in a little taste test to decide once and for all which pie crust reigns supreme:

Special thanks to First Slice Pie Cafe and Bang Bang Pie Shop for contributing pies to our experiment.